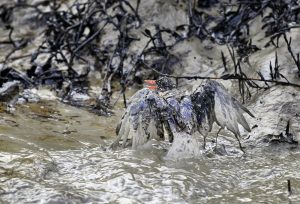 Used oil — employed to describe transmission oils, industrial oils, and most engine oils after use — is one of the most underrated environmental pollutants. Used oil contains contaminants like considerable quantities of toxic heavy metals, such as Pb, Zn, Cu, Cr, Ni, Cd and polynuclear aromatic hydrocarbons (PAH), which are also well-known for their high carcinogenicity and enrichment. These contaminants which are mostly fuel combustion products get concentrated in lubricating oil through transportation into the crankshaft.

Used oil is a waste product, in other words, “waste oil.” The major sources of pollution by used/waste oil are leaking containers, automotive traffic, and industrial activity generally. API says a single litre of waste oil pollutes up to one million litres of drinking water.

Per year, 25 million tons of waste oil is being produced all over the world which corresponds to a chain of one million tank trucks rowed with a length of 23 kilometres — a distance lengthier than the distance from the North Pole to the South Pole — up to 95% of it gets burned, dumped, or left in the nature. The energy of the waste oil arisen over the year could have fueled the 85 energetically weakest countries with a consistent, stable, and low-cost frequency.

Used oil that is leaked, spilled, or inappropriately cast-off may rapidly enter rain and storm-water runoff, and eventually have adverse effects on aquatic environmental health. Oils have significant potential to make environmental damage more severe by their ability to spread over large areas of land and water.

These oils can block sunlight and prevent oxygen from entering the water by creating a film on the water surface. This also makes it tough for marine plants to photosynthesize and thus, ultimately reduces plant and animal life in the water body.

Sewage treatment plants can get contaminated by very small concentrations of waste oil (50 to 100 ppm) in waste-water, which may lead to higher operational and maintenance costs followed by reduced treatment efficiency.

The soil is no different from water regarding getting polluted by waste oil. Used or waste oil that is spilled over land can render the soil unproductive and infertile.

Contamination of groundwater is strongly connected to spillage of waste oil over land.

Placing the used/waste oil in landfills leads to oozing through the bottom of such landfills, and adulteration of ground-water supplies. Spillage of these oils containing contaminants can bring changes in the biological cycles in the soil through inhibiting natural plant development. Oil fills the micropores between soil elements and hinders oxygen entry.

Besides, the heavy metal content of the survived plants increases and obstructs nitrogen transformations and carbon, sulphur, and phosphorous mineralization.

Used oil is barely recycled, but, at the best, gets disposed in a so-called environmentally approachable way — in other words, it gets burned in most of the countries. But uncontrolled and unplanned burning may result in substantial levels of harmful discharges to the atmosphere, exposing humans, wildlife, and vegetation to harmful constituents.

In urban runoff along with aquatic sediment in urban areas, motor oil is primarily associated with used oil and waste oil. However, a report of Office of Environmental Health Hazard Assessment (OEHHA) in 2006 says that the extent to which used oil, waste oil, and oil byproducts are polluting water runoff, percolating through ground-water, and the final receiving water is basically unidentified.

Unlike the industrial nations, a larger part of the world does not have any strict guidelines and solutions for the disposal of the spilled oil.

The Sundarbans, the largest mangrove forest in the world and a UNESCO World Heritage Site, faced a devastating oil tanker accident on December 9, 2014.   According to National Geographic, the tanker released approximately 94,000 gallons (78,271 Imperial gallons) of heavy fuel oil into the Shela River of the Sundarbans. Another accident came on June 19, 2015, when three furnace oil wagons disrupted and dropped in Boalkhali canal of Karnaphuli river in the southern part of Bangladesh. The canal swallowed thousands of litres of furnace oil.

The need for a functional oil spill contingency plan was highlighted by these two major spills. According to DoE, 20 government agencies, including port authorities, the navy, and coastguard are working on finalizing the plan and related policies containing all necessary issues including process, operations, and capacity-building.

Spillage of both used oil and waste oil require speedy and proper disposal or recycling. It must be handled using licensed disposal and storing conveniences with allowable treatments. If properly maintained and recycled, waste oil can play a vital role as a fuel source, and reduce pressure on natural gas and other fuel supplies. For every gallon of waste oil getting burned, a gallon of oil or gasoline can be saved from the distribution chain.

Posted in Oil Spill Clean Up and tagged oil spill