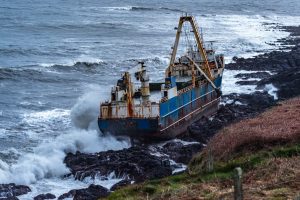 Cork County Council has said that there are no signs of contamination to the protected Ballycotton Bay as a result of yesterday evening’s wreck of an abandoned cargo ship off East Cork.  The vessel was abandoned since September 2018 and was drifting across the Atlantic until it was grounded in Ballycotton during Storm Denis last night. The US Coast Guard had rescued the ship’s 10 crew members in the Atlantic Ocean in 2018.  The local authority said today that its environmental scientists visited the site and is satisfied that there is no visible pollution within the Ballycotton Bay Special Area of Conservation (SAC) or nearby Natural Heritage Areas.

Ballycotton Bay is a special protected area and home to endangered bird species including Ringland Plovers, Teals and Lapwings. The Bay’s wetland habitats have also been identified of conservation significance for non-breeding waterbirds.  It forms part of a European network of nature areas protected under EU law to ensure the preservation of a wide range of rare, endangered or endemic animal and plant species.

The Council had said last night that it had convened its oil spill assessment team to evaluate the situation as part of its contingency plan in response to the grounding of the cargo ship.  Monitoring of the situation by the local authority as well as the Irish Coast Guard continues. The Council’s marine contractor is set to board the vessel for further contamination assessments, tomorrow morning.  The Council has warned members of the public to stay away from the wreck location as “it is on a dangerous and inaccessible stretch of coastline and is on an unstable condition”.

The latest major oil spill in Ireland dates back to 2009 when 1,000 tonnes of oil spilt from two Russian naval vessels in the waters off the west of Cork. According to The Irish Times, some 522 tonnes of fuel oil leaked in three distinct slicks 39 miles south of the Old Head of Kinsale.

Oil drops are often so small that they are not visible in the water to prompt an immediate clean-up response, silently causing substantial damage to marine life. In 2017, 672,000 gallons of oil spilt through a fractured pipeline below the ocean’s surface in the Gulf of Mexico, with no trace of it visible in the water.

Verde Remediation Services are Ireland’s largest oil spill remediation (clean up) company and experts in the management of complex heating oil spills of kerosene and diesel.

We have successfully completed over 3,000 domestic oil spill remediation projects across the whole of Ireland from our offices in Wicklow, Cork, Galway and Mayo.

Our specialist teams, overseen by a dedicated Project Manager, are on hand to help you clean up the affected area and get your property back to normal in no time.